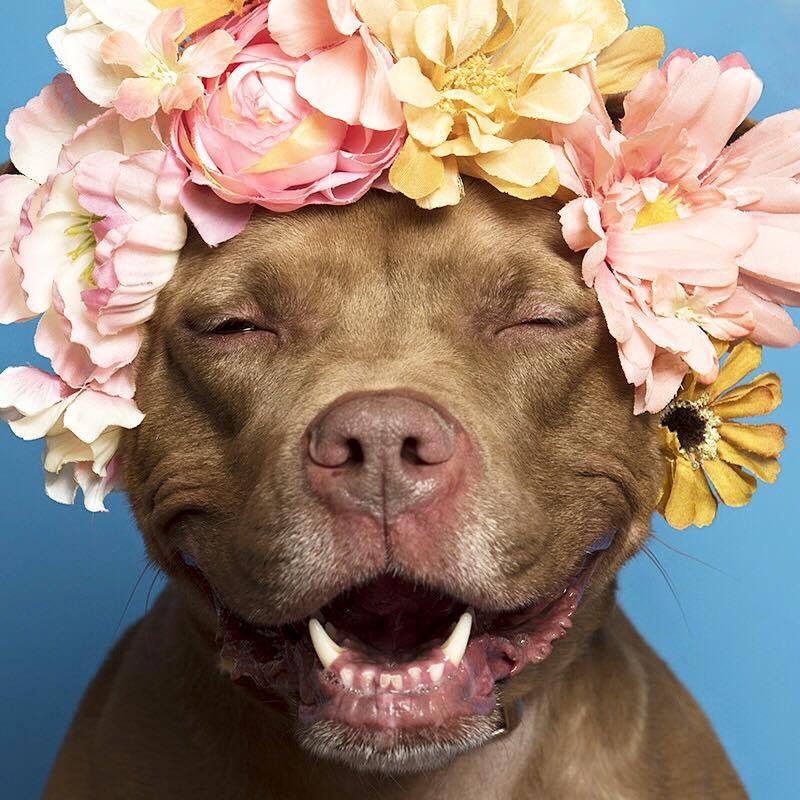 It took under 5 minutes for Sophie Gamand, award-winning photographer and animal advocate, to have me in tears.

It was not her intention, but the nature of her work exposes her to things that I found hard to hear.

What started as a hobby, taking pictures of shelter dogs to help them get adopted, is now a full-time occupation for Sophie, since the success of her Pit Bull Flower Power series.

Travelling around the US, she photographs rescue pit bulls, often dogs that have suffered terrible cruelty and neglect.

Of all the 3.9 million dogs that enter US shelters, pit bulls are the least likely to be adopted (as few as 1 in 600), and the rest (somewhere in the region of 800,000 to 1 million every year) are euthanised.

The purpose of the Pit Bull Flower Power series is to raise awareness about the plight of this misused, misunderstood dog.

I wanted to understand how Sophie protects herself from all the terrible things she must see and hear.

“If you’d asked me that a week ago, I probably would have given a different answer. I’m just back from a trip and I’m still in shock from the things I’ve seen.”

Sophie traveled with The Sato Project, a rescue centre based in New York that is dedicated to helping abused and abandoned dogs from Puerto Rico (a tiny island with 500,000 stray dogs living in horrible conditions).

“We visited an underfunded, overwhelmed shelter and I took photos there. We also rescued a few dogs (two of which I am currently fostering). Ordinarily, I try and avoid getting emotionally involved. I just focus on the task; the dog that’s in front of my camera right now, trying to portray the dog as friendly, healthy and ready for adoption. But this last trip has left me really shaken.”

It was at this point that we were both in tears, as Sophie went on to describe in some detail the filth, the noise; concrete box stacked upon concrete box stuffed full of puppies. But despite what she has witnessed, she says this particular campaign is about showing positive images. 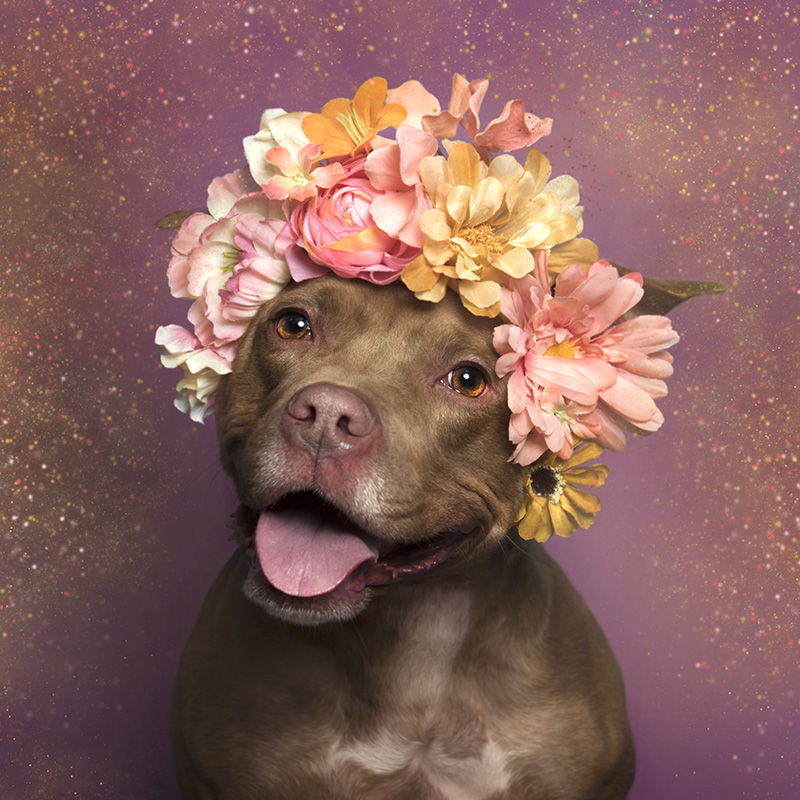 “It’s not about exposing the horrors; not everybody can cope with seeing that stuff. I want to rebrand these dogs, change people’s perceptions and get them adopted.”

So, I asked french-born Sophie how she ended up photographing dogs in New York?

“For years I’d been trying out all sorts of different things. I studied a Masters in law for 5 years and almost lost my soul. I even sang opera for a while but my heart just wasn’t in it.”

Whilst living in Geneva, Sophie met a Swedish man (now her husband).

“We decided we wanted to go somewhere new, somewhere neither of us were familiar with. So we ended up in New York. It’s the best thing that could have happened; it’s such a great place to reinvent yourself. But starting from scratch like that – not knowing anyone or anything in your new environment – it was really overwhelming. I needed a way to make friends, so I enrolled on a short photography course. Our first assignment was to take a photograph of a stranger on the street. Terrifying for a shy person like me!”

So, thinking it would be easier to speak to a stranger through their pet, Sophie walked into a vet clinic and ended up taking a picture of a dog instead.

Although she says she didn’t make a single friend from the course, it is how she found her voice, and it sparked her interest in the complex relationship between humans and their dogs.

Animal lovers in the US spend about $60 billion a year on pet-related products and services and yet in the same country, 3.9 million dogs end up in shelters.

“I can’t help thinking that this [statistic] is just another example of society’s fast culture, our disposable attitude even to other living creatures. But we have a massive responsibility to dogs” says Gamand. “Afterall, man designed the modern dog. We’ve manipulated their genetics, subdued a whole species; made them what we want them to be.”

Sophie believes we are failing dogs at a societal level. Puerto Rico is an extreme example of this, over run with stray dogs they don’t have the resources or the money to fix the problem.

“But it’s not just about the money” says Gamand. “It’s about education. Many dog rescuers have very black and white views about people, but I can see both sides of the story. So often it’s a cultural thing, people don’t know any better. I think kids should be taught compassion at school, and everyone should spend just one day in a shelter.”

To date, over 300 dogs have been photographed for the Pit Bull Flower Power series, more than half of which have since been adopted.

“After the first few images went viral, I realised I’d hit upon something powerful that could really make a difference” says Gamand.

Since then, what started as a personal art project has become a movement on social media, with over 200K followers of the Pit Bull Flower Power series on Instagram alone.

“Like all dogs, pit bulls need the right care, training and socialisation but they have a false reputation for being much more dangerous than other dogs, and in turn that attracts the wrong type of owner who’s looking for a ’scary dog’. It’s a vicious circle.”

To challenge the way we see pit bulls, Sophie uses flower crowns to soften their image and create an emotional connection with the viewer. And, like every dog, each crown is unique.

“It’s hard work” says Gamand. “I can sometimes photograph up to 30 or even 40 dogs in one a day. It can be frustrating and very messy; nose prints on my camera and slobber everywhere! But as soon as I get the shot I forget about the rest.”

“I just love it when a dog understands what we want and then gets all excited when they get the reward for it – they are so proud. Often these dogs have been through so much and their daily life in the shelter is not fun. The photo shoot is a break from their usual routine – it’s stimulating for them.”

I asked Sophie how can people get involved with the campaign?

You can buy prints, calendars and other merchandise from Sophie’s shop, and all proceeds help fund Sophie’s pro bono work.

“My aim is to continue this work; I have a waiting list of rescue centres all over-the-world asking for help. But I have a few big projects in the making, including trying to crowd-fund my Flower Power book in 2017 – when I can find the time!”

Before I wrap-up my long conversation with Sophie (which, like her work, has been full of highs and lows), I ask her if she has a dog at home?

“It looks like I might be adopting  a little rescue guy from Puerto Rico! Still fostering now, but it’s looking promising!” 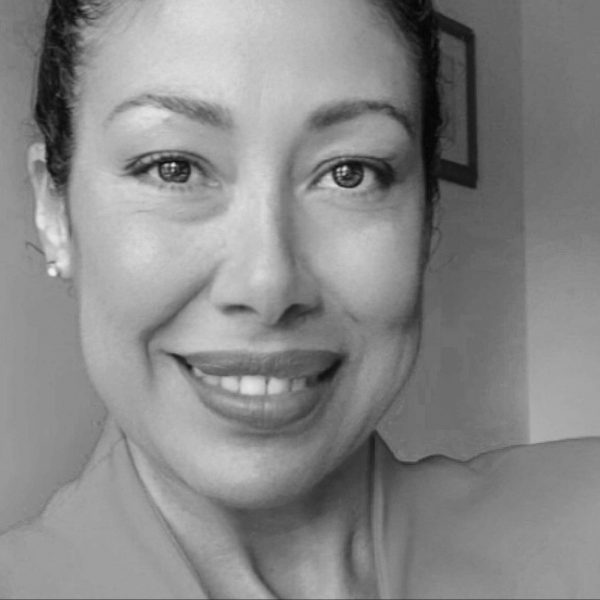 Interview with Giovanna Jagger, CSR warrior and co-founder of WokenUp 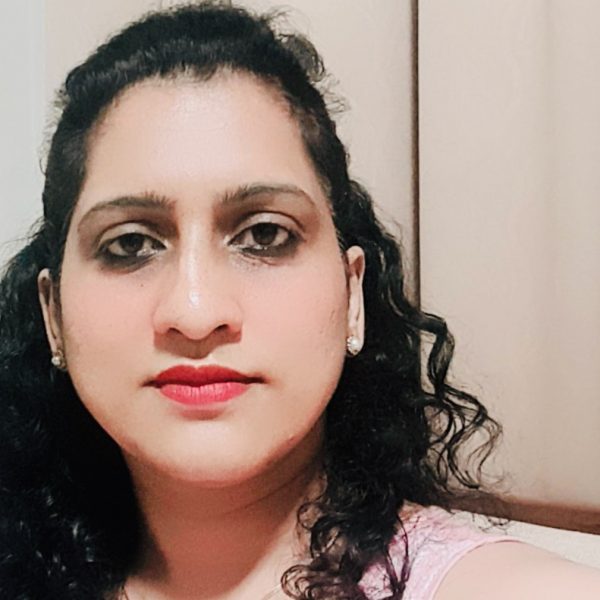 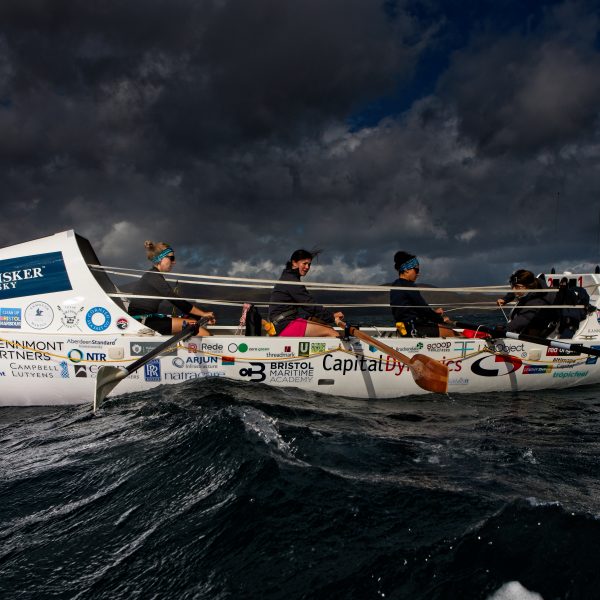 Who row the world? Bristol Gulls! Four women rowing the Atlantic in an eco-friendly boat.

Does your brand have the potential to make a positive impact, either through its product/service, or by using its platform and voice? If so, we can help you identify and articulate your purpose, or sharpen-up the one you've got... END_OF_DOCUMENT_TOKEN_TO_BE_REPLACED